"Whoop! Huh-ha, look out!"
―Candyman, when using his Special

Candyman is a tap-dancing dandy with a big yellow head. He hits the ball with his cane and he has a special ability to change the chemical composition of certain objects to give them strange and odd properties due to his mutation. He’s jazzy, expressive and crazy. Always enjoying himself too...

In Blaze, Candyman retains the highest jump in the game. However, Candyman also gains the ability to teleport by sliding into the wall (also known as a "wall port"), causing him to reappear on the opposite side of the stage.

Candyman's special (aka "candy-ball") changes the properties of the ball for a brief period of time, allowing it to phase through walls. The candy-ball will appear on the surface parallel to the one it entered with the same angle as before. For example, if the ball hits the left wall, it will show up on the right wall, and if it hits the floor it will go to the ceiling. Candy's special gets cancelled once it hits two different surfaces, however Candy can continue his special forever ("candy-chain") by hitting the candy-ball before it bounces. Hitting the ball in Candy's special has a shortened hitlag (between 20-50 frames, depending on speed), which allows Candyman to overwhelm his opponent by quickly chaining the ball around the stage. 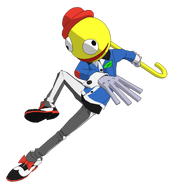 Candy appearing in one of the Steam Profile Backgrounds 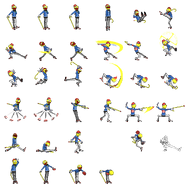 Candyman using his special on the ball
Community content is available under CC-BY-SA unless otherwise noted.
Advertisement