Raptor is a rookie in the Lethal League scene, hailing from the south. Though young, he’s very determined and fiercely competitive. His weapon of choice is a metal baseball bat and his special ability allows him to twist around and quickly hit the ball two times in a row.

After hitting the ball, Raptor can either hit the big ball again in one of six angles, plus a bonus smash angle when grounded; or bunt it. The timing of this ability can be altered by holding down the button for varying lengths of time, and if it's held for the longest possible time, the ball's speed will be doubled like a smash. Using this ability resets the hitlag timer, so it can be used at the very beginning of hitlag to shorten it or used at the very end to lengthen it. If the Raptor player jumps immediately after activating the bunt version can lead into another hit, bunt, or grab of the ball. It can be used to quickly hit the Ball towards an unexpecting opponent before or after they expect the ball to be hit.

Raptor is said to be grandson of 'Rex', founder of Rex Works, which we learn of through Latch's L2 Mecha Skin. It is said in Lethal League Blaze's Story Mode that an explosion happened, causing the assumed death of Rex, and causing Raptor to be stitched up with baseball stitches, presumably by Toxic.

Reason for joining the Lethal League: Finding out what happened to Rex 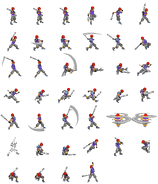